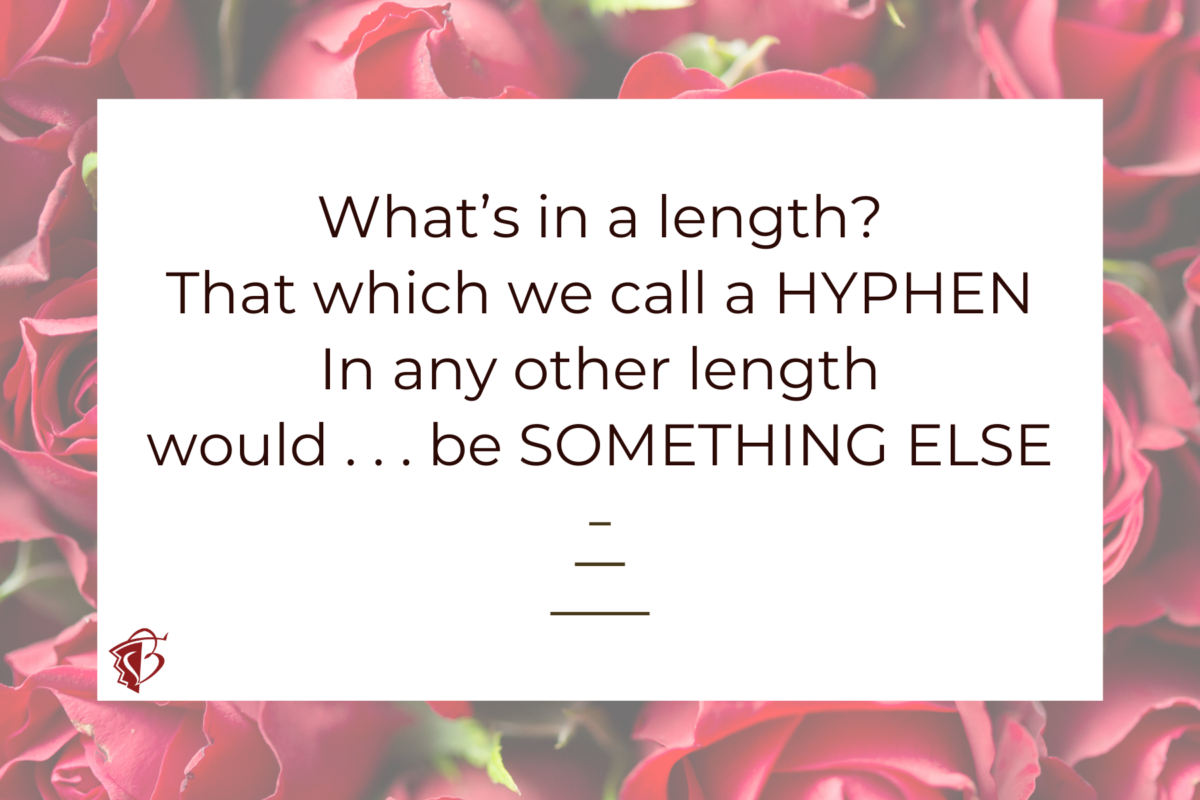 For editing on a PC in Microsoft Word, you have at least two possible methods available to insert these characters. To use the software to insert an em dash or an en dash, click INSERT, and then SYMBOL, and then MORE SYMBOLS, and then SPECIAL CHARACTERS. The em dash is the first on the list and the en dash is just below it. At this point, you have two options. You can either use the key combination given for the dash you need or you can place your cursor at the desired point of insertion and press INSERT. The hyphen is found on the top row of letters on your keyboard, just above and to the right of the letter P.

Another method is to use Alt codes to insert special characters. Simply press and hold down the Alt key on a PC while typing the character code on the numeric keypad. For example, Alt+0150 inserts an en dash, and Alt+0151 inserts an em dash. A recent PC World article provides more information on Alt codes. Lifewire.com published a helpful article about using Alt codes (or the Option key) on a Mac.

The third task for authors and editors is to learn the uses of these three horizontal marks.

The em dash is the easiest of the three marks to learn how to use. Long-established style guide Words into Type by Marjorie E. Skillin notes that the most common uses of the em dash are “to mark a suspension of the sense, a faltering in speech, a sudden change in construction, or an unexpected turn of thought.” CMOS tells us that the em dash can be used as an alternative to parentheses or in conjunction with a series of items separated by commas.

EXAMPLE: Three officers—the president, the manager, and the foreman—attended the meeting.

In general, editors should exercise caution in inserting em dashes if the author has not used any. Many older or more conservative authors frown upon the use of em dashes.

The principal use of the en dash is to connect continuing or inclusive numbers. Basically, it represents the word “to” between figures or words.

An en dash should not be used, however, if part of the range is expressed with a word.

“If you take hyphens seriously, you will surely go mad.” So said John Benbow as long ago as 1937. (Benbow was the author of Manuscript and Proof, which described the preparation of a manuscript for the Oxford University Press at the time.) To avoid going mad, remember that we hyphenate words to facilitate reading and to prevent ambiguity.

Hyphens are used to connect two elements to function as one unit.

Hyphens also are used to connect two elements for a specific purpose and to avoid misreading.

Hyphens are used to combine two or more words to modify a noun when the words act as an adjective and are used before the noun.

Hyphens usually are not used when the adjectives appear after the noun.

EXAMPLES: The area has multiple uses. The management plans are site specific.

Hyphens are used to create compound adjectives that consist of a number and a unit of measurement used before the noun.

Hyphens usually are not used when the adjectives appear after the noun.

EXAMPLES: The path is three miles long. The ditch easement is 50 feet.

CMOS contains a multipage guide for compounds and words formed with prefixes. It would take several blogs to summarize this extensive section; therefore I offer only one example.

Hyphenate a compound that occurs before a noun.

EXAMPLE: He wore an emerald-green tie.

Do not hyphenate a compound that comes after the noun.

EXAMPLE: His tie is emerald green.

As you can see, it is possible to “go mad” when deciding about how and where to use hyphens, but with guidelines from CMOS and other style manuals, editors and authors can make it through this seemingly dense thicket and remain sane.

In sum, em dashes, en dashes, and hyphens are physically distinct and have very different uses. This brief article provides only a glimpse into the numerous much more in-depth discussions that exist. Entire chapters delve into the complexities of dashes and hyphens. If you want to dive in, the titles provided below are a great place to begin.

9 comments on “Dashes and Hyphens: The Which, the How, and the Why”