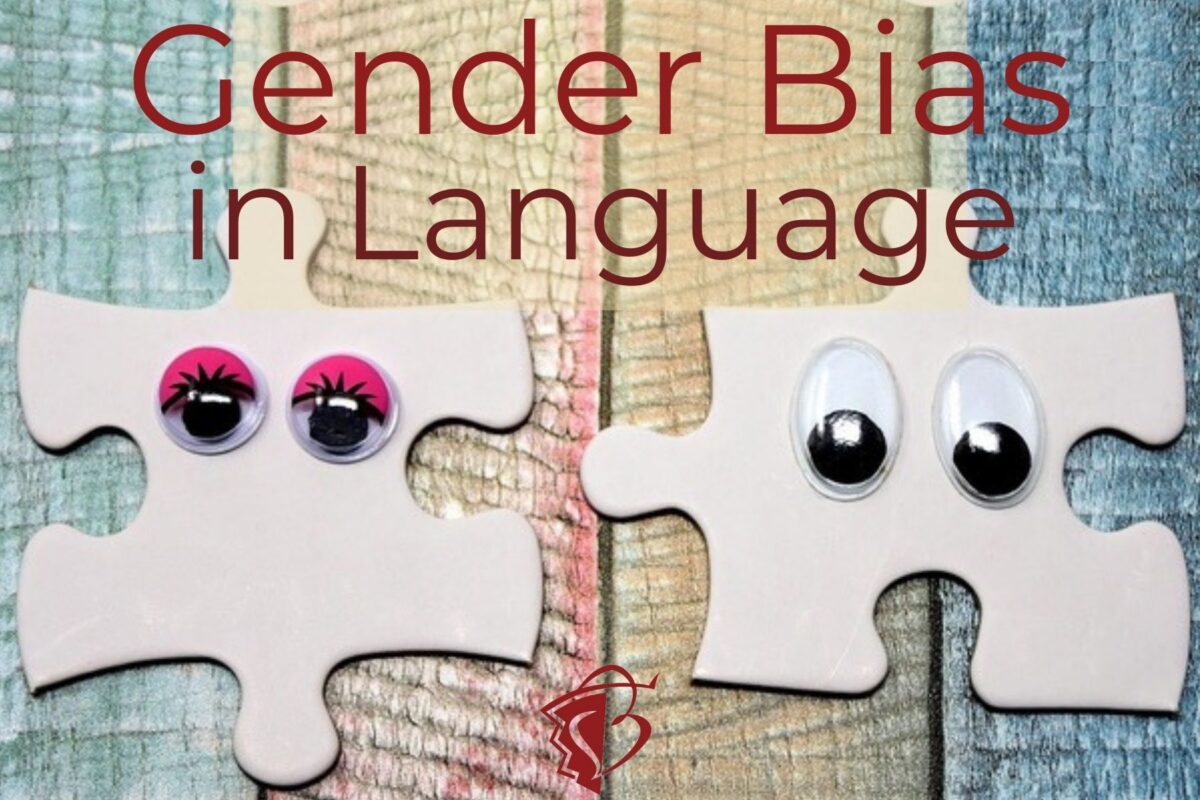 Words are printed in dictionaries, and grammar rules are drilled into students’ heads. Yet language, ever fluid, isn’t set in stone. How we speak and write changes with the ever-evolving societal attitudes of our times—especially when it comes to language encoded with gender identity.

What images pop into your mind when you hear the words pilot, banker, or nurse? Some people picture two men and a woman. Others associate all three professions with both men and women. In the distant future, gender-associated words may no longer exist, but until then, wordsmiths should be keenly aware of common gender connotations and terminology that could be offensive.

In the 1960s, when I grew up, terms like fireman and postman seemed natural because those jobs were done almost exclusively by men. Now, equal-opportunity alternatives such as firefighter and mail carrier are more appropriate for nonfiction, journalism, and academic writing, and we should always strive toward using nonsexist, antiracist, non-ageist terminology.

Fiction writers, on the other hand, should take note of sexist language (including vulgarities) to add authenticity to characters of different generations, geographic locations, or perspectives. For instance, an 80-year-old character might use now-outdated words such as stewardess or waitress instead of flight attendant or server.

The shift in pronouns

Gendered pronouns like he or she can be a minefield for a writer because they often reinforce an outdated concept of the “universal masculine,” illustrated by sentences such as “All men are created equal” and “Each person should examine his conscience.” With conscious effort, these examples can easily be corrected by rephrasing them to “All people are created equal” and “Each person should examine their conscience.” (When referring to the singular word person, it is now acceptable to use their or they instead of his or her or his/her. More on this later.)

Another concern around singular pronouns is they tend to pigeonhole an individual as either a him or a her. But what about those who identify as intersex, transgender, nonbinary, and/or gender nonconforming? This is a problem we’ve only recently begun to recognize. Here are two solutions:

1. Ask the individual. If you’re writing nonfiction or quoting a living person, request the correct spelling of their name and what pronouns they prefer to use. MyPronouns.org states that “it can be offensive or harassing to guess at someone’s pronouns and refer to them using those pronouns if that is not how that person wants to be known.” (MyPronouns.org offers resources on pronoun usage and stories from trans and gender nonconforming people about their real-life experiences with pronouns.)

2. Choose plural pronouns (the “singular they”). In English, the third-person-plural pronouns they, them, theirs, and themselves are all gender neutral and nonsexist. Commonly used in verbal communication, plural pronouns are becoming more acceptable in written language to refer to individuals who don’t identify as male or female. For example: “This is my friend Alex. I met them in college. They are a wonderful blues guitarist.”

Moreover, the “singular they” can refer to a person in a neutral, universal way—even if you know their physical sex. My friend Alex, for example, may not want to be in a pigeonhole at all and may simply prefer that gender not be addressed when they are discussed. Or, as a practical matter, you may simply not know the preference or facts regarding the person you’re writing about.

Use of the “singular they” is becoming more acceptable in print media. In 2017, The Associated Press Stylebook, widely used by many US media, added this: “They/them/their is acceptable in limited cases as a singular and-or gender-neutral pronoun, when alternative wording is overly awkward or clumsy.” The Chicago Manual of Style, which establishes guidelines for formal writing, approves of the “singular they” for a person who does not identify with a gender-specific pronoun. Otherwise, Chicago encourages rewording sentences to avoid gendered pronouns completely.

What’s up with womxn and Latinx?

No, these aren’t typos. They’re an effort to make terms gender neutral and to show respect for trans women. For decades, feminists have pointed out that the word woman contains the word man. Using an x—womxn—eliminates that problem, as do other alternate spellings, including wommin and womyn. All can be pronounced the traditional way (woom-uhn for singular, wim-in for plural) or by speaking the x: wom-inx or wom-ux. Dictionary.com defines the word this way:

“womxn: a woman (used, especially in intersectional feminism, as an alternative spelling to avoid the suggestion of sexism perceived in the sequences m-a-n and m-e-n, and to be inclusive of trans and nonbinary women).”

The other word in question, Latinx, is similarly fascinating. In many languages—including Spanish and Portuguese, which are spoken in Latin America—nouns are either masculine or feminine. (In English, most nouns and adjectives are not gender specific.)

In Spanish, if a word ends with an a, it’s usually feminine; an o is masculine. Amigo is a male friend; amiga is a female friend. But what’s the word for a group of friends that includes both boys and girls? Amigos—the masculine. Linguistically speaking, girls and women become invisible in Spanish plural nouns, and those who do not identify with either gender feel erroneously labeled.

American activists have embraced the term Latinx because they see Latino as excluding women. (It’s usually pronounced Latin-ex, by the way, when serving as a singular or plural adjective.)

Though Latinx is now included in the Merriam-Webster and Oxford English dictionaries, it’s still not widely used. In 2019, ThinkNow Research of Burbank, California, polled people of Latin American ancestry and found that 98 percent of respondents do not identify with the Latinx label, preferring Hispanic, Latino/Latina, and other terms. So if you’re writing a work of nonfiction about someone of Latin American descent, ask what descriptor that person prefers. A preference for Latinx (or one of the other alternative forms) should be respected, and editors should query authors about their preferred usage when in doubt.

Only time will tell whether womxn or Latinx will gain traction. I’m sure the ideas and intentions behind these terms won’t disappear, but the words themselves may continue to evolve over time. That’s the nature of language, after all. It’s forever reflecting back to us the many changes in how we think about identity and gender.

Laurel Kallenbach is a book editor and a writer who has far too many words in the current draft of her novel. She has a master’s degree in creative writing from Syracuse University and is a graduate of the Lighthouse Writers Workshop Book Project. She can be found online at LaurelKallenbach.com.

View all posts by Laurel Kallenbach

8 comments on “How to Minimize Gender Bias in Your Writing”